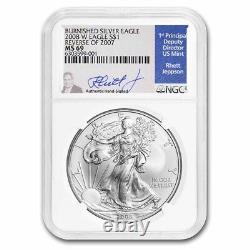 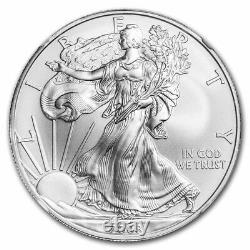 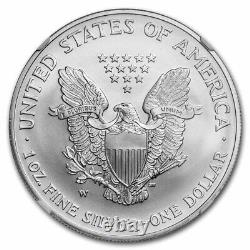 2008-W Burnished Silver Eagle MS-69 NGC (Rev'07, Jeppson) - SKU#257938. Photos in this listing may or may not be stock photos. The photos are meant to be an indication of the product you will receive. Though the mint switched reverse dies for the Silver Eagle in 2008, an estimated 47,000 burnished coins were accidentally minted using the old 2007 dies.

NGC encapsulation authenticates this mint error and guarantees the coin's MS-69 condition. Weinman's design showing Lady Liberty draped in an American flag, walking gracefully as the sun rises over a ridge. Reverse: A heraldic eagle is shown below 13 small stars, representing the original colonies. Sovereign coin backed by the U. Protect and display your Silver Eagle in style by adding an attractive display or gift box.

This highly sought-after coin is a rarity of the usually near-perfect modern minting process. Add the 2008 Reverse of 2007 Silver Eagle to your cart today! While a variety of differences from the standard 2008 issue can be noted in the reverse of this coin, the most obvious diagnostic is the U in United States.

2008 and subsequent issues featured a serif on this letter, while the earlier dies used a sans-serif character instead. Other differences including the spacing of the stars above the eagle, the spacing between the legend and the rim, and the style of tilde used between Fine Silver and One Dollar. 1,359 Item as described. Rec'd item, looking forward to doing business with again.

This item is in the category "Coins & Paper Money\Bullion\Silver\Coins". The seller is "apmex" and is located in this country: US.

This item can be shipped worldwide. Mint