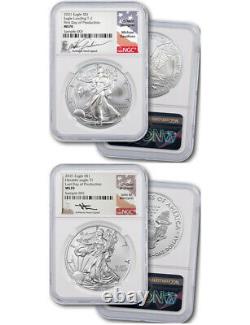 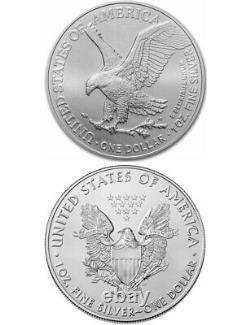 The last 400 boxes ever minted of the Type 1 and the First 400 boxes of the Type 2 is a must have for your collection. On one reverse we see the John Mercanti designed Type 1 silver eagle with they iconic Heraldic Eagle design and on the the brand new type 2 silver eagle reverse we have the new "Eagle Landing" designed by Emily Damstra and engraved by Michael Gaudioso. This two coin set includes a 2021 Type 2 Silver Eagle and a 2021 Type 1 Silver Eagle. Both coins are NGC certified and qualified for special designations. The Type 1 earned the "Last Day of Production" pedigree.

The Type 2 earned the "First Day of Production" pedigree. 999 Fine Silver Obverse depicts Walking LIberty design of Adolph Weinman Reverse depicts Eagle Landing design of Emily Damstra on Type 2 and Heraldic Eagle designed by John Mercanti on the Type 1. Michael Gaudioso is a graduate of the University of the Arts in Philadelphia. He earned his Master of Fine Arts from the New York Academy Graduate School of Figurative Art in New York City.

From 1995 to 1999, he studied sculpture at the prestigious Repin Institute in St. He is a classically trained draftsman and sculptor and taught figure drawing at Villanova University. Prior to joining the United States Mint's sculpting-engraving department in 2009, Gaudioso worked as a master painter and designer for America's oldest and largest stained glass studio, Willet Hauser. He resides in South Philadelphia with his wife and daughter.

2008 Code Talkers Recognition Congressional Medals Program - Cheyenne River Sioux Tribe obverse. John Mercanti was the 12th Chief Engraver of the United States Mint and designed the American Silver Eagle Reverse. The reverse design is John Mercanti's rendition of the Heraldic Eagle with a shield grasping an olive branch with one talon and an arrow in the other. Above the eagle are thirteen stars that represent the original thirteen colonies. The eagle holds a banner with the motto'E PLURIBUS UNUM' in its beak.

UNITED STATES OF AMERICA' and'1 OZ FINE SILVER ONE DOLLAR' are inscribed on this side along with John Mercanti's initials. The coins pictured are only a representation of the coins you will receive, not the exact coins (serial numbers will vary). Bullion items and books are excluded. LCR Coin is Your #1 Source for Certified Gold, Silver a Rare Coins.

We are Authorized PCGS and NGC dealers and are also members of PNG, ANA, ICTA, Coin World, and CCE. We are based in Hill Country in the heart of Texas. We are family owned and have been in this business for over 35 years. Thanks to our loyal customers, we have become one of the top trusted destination for Certified Graded Rare Coins, Modern Graded Coins, Gold and Silver Bullion and building Legacy Collections. LCR Coin is a place where you can safely browse coins numismatically, build Wishlist's, view the coins certification on NGC or PCGS and shop for coins in a fun no hassle way.

Subscribe to our monthly newsletter and receive exclusive offers on products. Dave Motl Signed Silver Eagles. This item is in the category "Coins & Paper Money\Bullion\Silver\Coins". The seller is "lcrcoin" and is located in this country: US. This item can be shipped to United States, Canada, United Kingdom, Australia, Japan, France, Ireland, Italy, Germany, Austria, New Zealand, Switzerland.