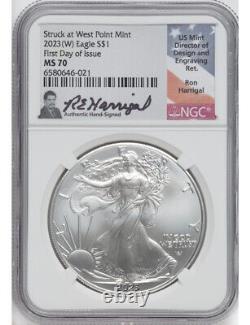 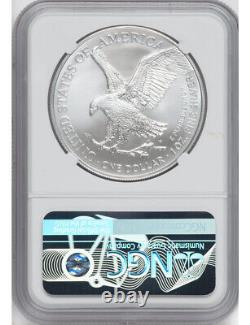 2023 (W) American Silver Eagle First Day of Issue NGC MS70 Ron Harrigal Signed. Authorized NGC & PCGS Dealer. NGC's encapsulation guarantees the coins MS70. This coin is Hand Signed by Ron Harrigal. The American Silver Eagle is the official silver bullion coin of the United States first released November 24, 1986. The US Mint produced the same reverse design famously known as John Mercanti's Heraldic Eagle up until 2021. The US Mint then changed the reverse design. The new "Eagle Landing" reverse design depicts an eagle as it approaches a landing, carrying an oak branch, as if to add it to a nest. Weight: 1.000 troy oz. Reverse Designed by Emily Damstra and engraved by Michael Gaudioso. Weinman designed the obverse known as The Walking Liberty.

The retired US Mint Director of Design and Engraving had an instrumental level of technical oversight during his tenure. For over 35 years, Harrigal applied his technical expertise to innovations involving the structural integrity of coins, which ultimately led to him serving as the US Mint Director of Design and Engraving from 2015 until his retirement in 2021. Among his contributions, Harrigal worked on modern edge lettering, which is currently used on Sacagawea and American Innovation Dollars; planchet specifications for many coin programs, including the American Gold Buffalo and American Palladium Eagle coins; and alloy, dimensions and die specifications for large format coins. He provided design specifications for dies to create the first US-produced concave coins and managed the redesign of the American Silver and Gold Eagle coins in 2021.

Additionally, Harrigal oversaw the first laser frosting application on a US Mint product and the implementation of the privy marks found on 2021 Morgan Dollars. Ron Harrigal's name has been associated with the United States Mint since 1985.

Ron Harrigal became acting Chief Engraver for over two years, starting in November 2010. During this time, he managed the creation/design of the Ultra-High 24k gold coin with raised edge lettering, improved die finishing techniques, and multi-level frosting on proof coins. The coin pictured is only a representation of the coin you will receive, not the exact coin (serial numbers will vary). Bullion items and books are excluded. LCR Coin is Your #1 Source for Certified Gold, Silver a Rare Coins. We are Authorized PCGS and NGC dealers and are also members of PNG, ANA, ICTA, Coin World, and CCE.

We are based in Hill Country in the heart of Texas. We are family owned and have been in this business for over 35 years. Thanks to our loyal customers, we have become one of the top trusted destination for Certified Graded Rare Coins, Modern Graded Coins, Gold and Silver Bullion and building Legacy Collections.

LCR Coin is a place where you can safely browse coins numismatically, build Wishlist's, view the coins certification on NGC or PCGS and shop for coins in a fun no hassle way. Subscribe to our monthly newsletter and receive exclusive offers on products. Dave Motl Signed Silver Eagles.

This item is in the category "Coins & Paper Money\Bullion\Silver\Coins". The seller is "lcrcoin" and is located in this country: US. This item can be shipped to United States, Canada, United Kingdom, Australia, Japan, France, Ireland, Italy, Germany, Austria, New Zealand, Switzerland.